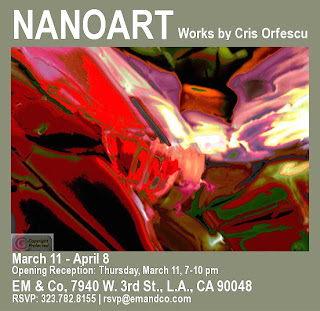 Cris Orfescu was born in Bucharest, Romania, and has lived and worked in Los Angeles since 1991. A scientist by day, he runs an analytical laboratory which uses nanotechnology to design improved lithium batteries. The molecular landscapes of various materials with which he works, measured in nanometers, are his inspiration and jumping-off point for his art. Using an electron microscope, he manipulates compounds and chemicals to create nano-sculptures, captures the images, which he then blows up into large artworks, digitizes, and applies color. A self-taught artist, he has been experimenting for over 40 years with different media and art forms, including digital art, murals, acrylic and oil painting, mixed media, and collage. 'NanoArt', a term he has coined, reflects the transition from Science to Art through Technology. Orfescu has shown his works in numerous solo and group exhibitions in the US, Italy, France, Finland, Korea, UK, Ireland, Spain, Germany, Colombia, and Greece, and has won many awards in juried shows. For more information, please visit: www.crisorfescu.com.

Here are some extracts from prestigious publications about his work:

"...artists face a fundamental hurdle" trying to represent "the molecular landscapes of various materials, where features are measured in nanometers... For abstractionists like Mr. Orfescu though, such limitations are simply invitations to let color and shape-shifting run wild." (The New York Times)

"Artist and scientist Cris Orfescu manipulates chemicals and creates nano-sculptures, which he then blows up into large artworks with an electron scanning microscope." (The Wall Street Journal)

"Shouting their presence in loud shades of red, blue and yellow, artist and scientist Cris Orfescu's images look first like abstract pieces. The colorful curves, angular lines and sudden bursts that command the canvases appear to be the fantastical expression of the artist's whim and creative taste...Orfescu's partner in the exhibit, photographer Rick Chinelli, said "personally, I think that Cris works on another level both physically and mentally." (Pasadena Star News) "Cris Orfescu lives in a fun universe, populated by phantasmagoric creatures which one would say come from another planet... In his studio-lab he is having a good time sculpting the imperceptible." (translated from the French magazine Stuff)

Truly an appreciable design by Cris Orfescu, personally I like it much and I’ll probably be again to read much more.