NanoArt by Orfescu at the Prince of Asturias Awards 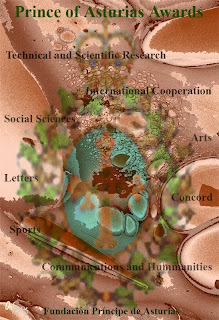 Cris Orfescu has been invited to exhibit NanoArt to the 2008 Prince of Asturias Awards at the Campoamor Theatre in Oviedo, the capital of Asturias, Spain.
The Prince of Asturias Foundation has conferred its Awards yearly ever since 1981. They are intended to acknowledge scientific, technical, cultural, social and humanitarian work carried out internationally by individuals, groups or organizations in the following eight categories: communication and humanities, social sciences, arts, letters, scientific and technical research, international cooperation, concord and sports. H.R.H. Felipe de Borbón, Prince of Asturias and Heir to the throne of Spain is the Honorary President of the Foundation that bears His name since its creation in 1980. The aim of the Foundation is to contribute to encouraging and promoting scientific, cultural and humanistic values that form part of mankind's universal heritage. Bob Dylan, Al Gore, George M. Whiteside, Google, National Geographic Society, Maya Plisetskaya, Woody Allen, Paco de Lucia, Bill and Melinda Gates Foundation, Lance Armstrong, Vittorio Gassmann, Yehudi Menuhin, Michail Gorbachev, Carl Lewis, are among the winners since the beginning of the award. The award presentation ceremony is considered as one of the most important cultural events in the international agenda. Throughout its history, these awards have been honored with different recognitions, such as UNESCO’s declaration in 2004 acknowledging the extraordinary contribution of these awards to mankind's cultural heritage. This year, the grand presentation ceremony is to be held on Friday, October 24th at 6:30 pm.

NanoArt is the expression of the New Technological Revolution reflecting the transition from Science to Art using Technology and could be for the 21st Century what Photography was for the 20th Century. Over the past two decades the ability to measure and manipulate matter at atomic and molecular scales has led to the discovery of novel materials and phenomena. These advances underlie the multidisciplinary areas known today as Nanotechnology. The responsible development and application of Nanotechnology could lead to create jobs and economic growth, to enhance national security, and to improve the quality of life. Some of the benefits would be cleaner manufacturing processes, stronger and lighter building materials, smaller and faster computers, and more powerful ways to detect and treat disease. NanoArt is aimed to raise the public awareness of Nanotechnology and its impact on our lives.
For updated information about the event, please check the event site at http://www.fundacionprincipedeasturias.org/ing/00/index.html.
To view Orfescu's work visit http://www.crisorfescu.com/ or http://nanoart.org/
Posted by Cris Orfescu at 11:49 PM No comments: